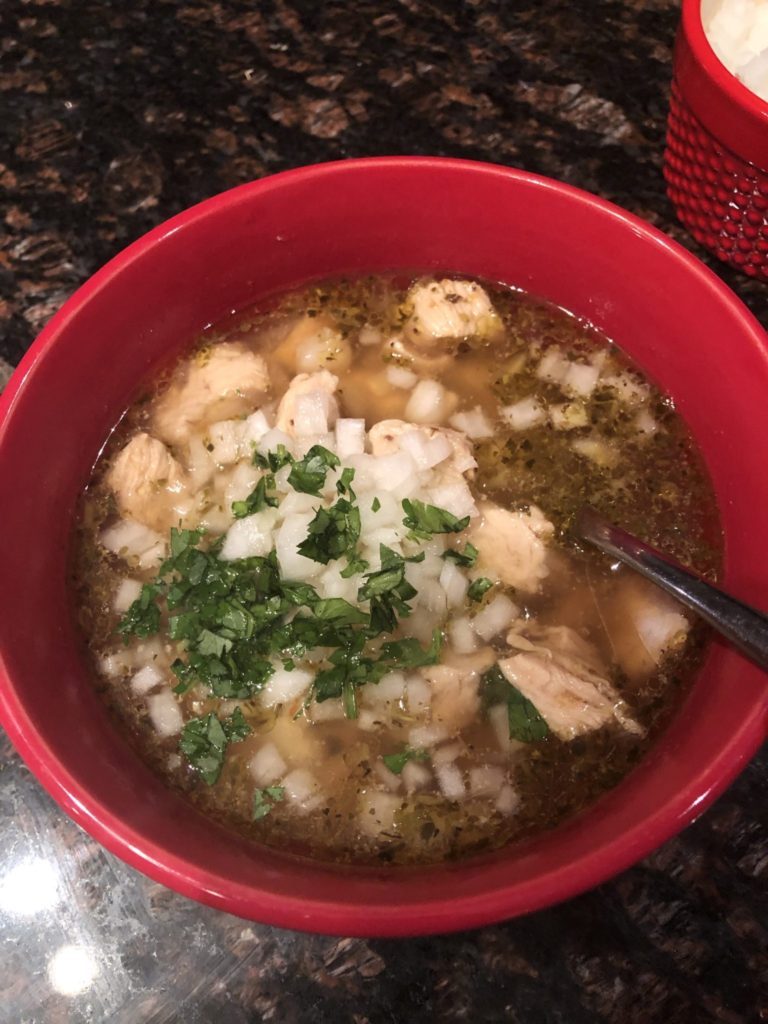 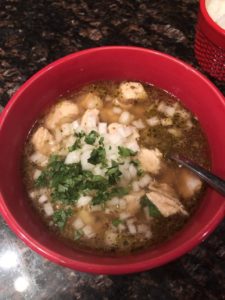 Pozole is a traditional Mexican soup dish that is often served at celebratory events as well as New Year’s Eve.

It is usually made with pork or chicken. The majority that I have had was pork, which is delicious. When I made this recipe, I didn’t have any pork on hand so I thought I’d use up the chicken I had.

It was raining the day I decided to make the soup. I mean, it is beginning to be THAT kind of weather. I can only think of 2 things that are good for fall/winter. They are Christmas, and New Year’s Eve. Actually, there’s probably more but the colder weather is great for soups.

This Mexican dish is great because it’s hearty, quick and easy to make and uses lean meats. High in protein and fiber, this will keep you warm during those cold blustery winter nights.

It’s just a few simple ingredients that you probably already have lying around in your pantry.

Pozole is a Mexican soup using hominy, pork or chicken. The broth is usually clear, red, or green. Pozole is traditionally served on New Year’s Eve and is

Joe Eats World is a the brain child of Joe Morales. Joe Eats World is a journey of discovery in cooking, eating, and traveling. Joe is learning as much as he can about food, cooking techniques, and the chefs behind each plate. Visit joeeatsworld.com for more tips, tricks, and insights!Make sure to follow him on his social media accounts below and visit his website to subscribe to his newsletter!

Don’t Screw up Thanksgiving!: Most Common Mistakes and Ways to Fix Them.

Next post
Don’t Screw up Thanksgiving!: Most Common Mistakes and Ways to Fix Them.

5 Tips for the Best Turkey of Your Dang Life!

Don’t Screw up Thanksgiving!: Most Common Mistakes and Ways to Fix Them.

Everyone needs that go...

Sorry, the comment form is closed at this time.