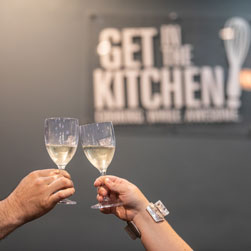 Have you ever wanted to know what wines to pair with what dishes and why? Now you can!

Every Wednesday A different chef will teach you some amazing small plate and appetizer dishes and then teach you how and why they pair them with their favorite wines! Every Wednesday is a different menu and different pairing. You will get a complimentary sample of wine with each course, but BYOB for everything else! Join Chef Allen this week!

Join us for a night of food, socializing and fun while learning how to pair wines and cook awesomeness! This party is BYOB for everything but the one sample of wine per pairing and will be a hands-on cooking event!  Grab a friend or three and head on over for the best cooking event you’ll ever attend! You must be 21 to attend this event.

Bananas Foster-Paired with a Reisling

Chicago Cooking Classes- Don’t let anyone else have your fun!